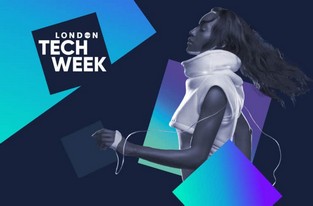 DADA joined other members of the London Chamber of Commerce and Industry (LCCI) to attend London Tech Week (June 10-14). London Tech Week (LTW) is of particular global significance as according to data by Tech Nation and Dealroom, the UK is the third in the world for producing successful tech companies, behind the US and China. Things are only set to continue with the current UK Prime Minister Theresa May saying at the LTW that more than £1.2 billion is expected to be invested in UK tech companies from around the world this year.

DADA have identified some trends and topics that took front stage at London Tech Week. 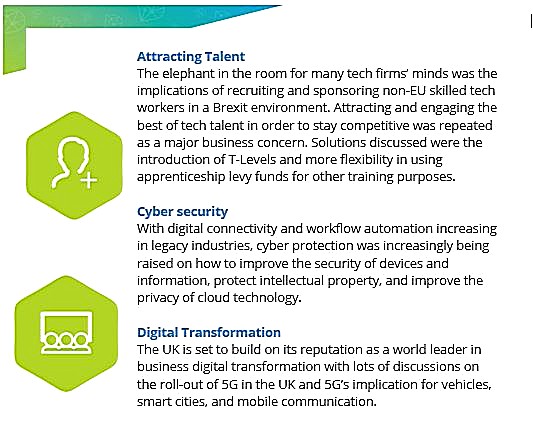 London’s position as a leading global city cannot be taken for granted. By 2020 the capital is forecast to reach a population of nine million and achieve megacity status by 2030 with over ten million citizens…We need to ensure that the workforce has the skills to cope with not only this expansion, but the challenges that are produced as a result of Brexit and factors such as Artificial Intelligence (AI).”
London Chamber of Commerce and Industry (LCCI) Chief Executive Colin Stanbridge

There has always been tension between London as an innate global city versus nation-state tension. Hence London’s need for global talent does not align with English national sentiment, which often resists immigration. Although, in aggregate, Londoners did not vote in favour of Brexit (60 percent remain, 40 percent leave), the U.K. did (48 percent remain, 52 percent leave), and London must now adjust to a post-EU scenario.

There are three imperatives for London, moving forward as a global city in the post-EU state: 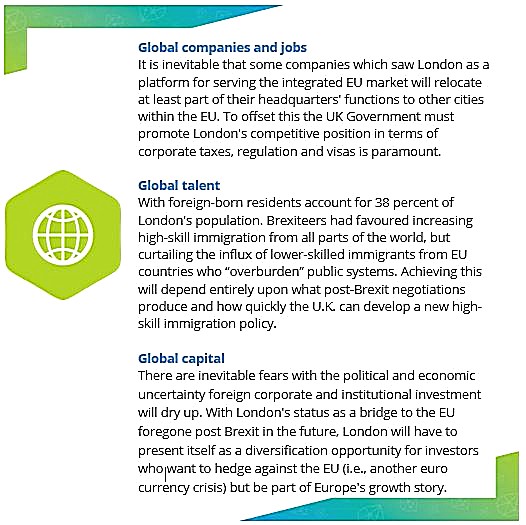 Combined with these concerns over attracting Global talent due to macro decisions such as Brexit was a recognition that the workplace is being dramatically changed with other trends.

Not only millennial expectations but growing concerns over cultural and gender diversity in the boardroom are changing how companies’ staff acquisition and retention strategies. Combined with this is the growing use of Artificial Intelligence (AI) to otherwise time-consuming screening process. Chatbots can deliver personalized information quickly and efficiently to time-strapped employees, while virtual reality (VR) will allow organizations to test and train candidates in a controlled, simulated environment.

These two key factors – disruptive technology and demographics – are driving a fundamental shift towards an unknown ‘future of work’.

Companies need to answer important questions; how can they create robust yet flexible workforce planning processes, how has technology changed jobs so far, what are the skills that will be required for their future, and how do they prepare for a future not yet defined?