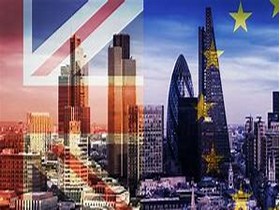 On 29 March next year, the UK would leave the EU and everything associated with that would come to an end. A “No Deal” doesn’t stop the UK leaving but it means there’s no clarity about what happens next. So is your project prepared for a “No Deal” Brexit?

To prepare for the ever-looming 29 March deadline, the government published a suite of 24 documents with guidance on how to prepare for a no-deal scenario over the summer. The papers covered areas such as farming, nuclear, money and tax, medicines and medical equipment and imports. However none of the 24 explicitly covered construction.

So in this article we will explicitly cover the topics that a “No Deal” Brexit will pose to Construction and Engineering companies.

So what does “No-Deal” Brexit mean?

Leaving without any deal would mean an immediate Brexit, without the 21-month transition period agreed upon with Brussels. The plus side being only that the EU forfeit the £39 billion bill the UK will have to pay the EU.

Take for example Airbus’s 14,000 UK staff are employed across 25 manufacturing sites – about half are in Wales. They have already said that said the current planned transition period, due to end in December 2020, was too short for it to make changes to its supply chain. As a result, it would “refrain from extending” its UK supplier base.

Contact us today to learn how you can benefit from a free P3M3 audit and analysis to deal with these issues addressed from the start.

It’s not been so bad!

Despite the doom-gloom post the Brexit vote in July 2018 Federation of Master Builders revealed that the construction SME sector has now enjoyed more than five years of consecutive quarterly growth despite Brexit concerns. Construction SME workloads remained positive in Q2 2018 and grew at a faster rate than they did in the first quarter of 2018.

However despite this good news story Brian Berry, Chief Executive of the FMB, revealed some underlying concerns that can only be exacerbated in a non-Brexit deal:

These exiting concerns on material inflation, resource shortages and profit margins can only worsen post a “No-Deal” Brexit.

So what’s the worry?

Analysis from economic analysts, Cambridge Econometrics commissioned by the Mayor of London suggests the potential impact of a no-deal Brexit on homebuilding could lead to 43,000 fewer construction jobs in the UK. In London alone there could be 5,000 fewer jobs in the construction sector under a no deal Brexit, with the capital’s construction sector output potentially falling by £1.2bn up to 2030. This inevitably will have a social impact on London desperately needing to boost affordable homebuilding to tackle the housing crisis.

The likely inflation in labour and material costs has already been highlighted by Arcadis head of futures Will Waller:

“Firms are having to commit to prices, and there is no way of knowing what the labour market [and] materials market will be like post-March.” 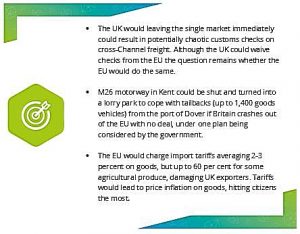 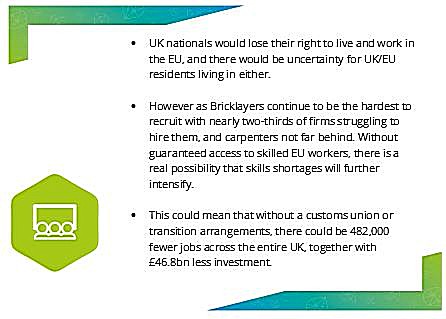 Some companies have already prepared mitigation plans to move to Northern Ireland which could potentially stay in the EU customs union, large parts of the single market and the EU VAT system.

Despite the inevitable metaphysical damage this would have to the union as a whole there are practical questions as to where Norther Ireland will get it’s power. This is because Northern Ireland and the Republic have a shared electricity supply and market under the terms of the 1998 Good Friday Agreement.

In a worst-case scenario, it’s claimed the Republic could cut off power to the north. In a potential government mitigation plan revealed to the Financial Times this could result in thousands of generators being requisitioned from the Army and floating them in the Irish Sea to keep Northern Ireland’s lights on.

Although this seems like outlandish scaremongering at first we should consider that Irish Premier Leo Varadkar has already threatened to ban British planes from Irish airspace saying: “The situation at the moment is that the UK is part of the Single European Sky and if they leave the EU they are not. If they want their planes to fly over our sky, they would need to take that into account.”

What can companies do to protect themselves?

The key challenge that Project Leaders must ask themselves is “how well can their projects cope with the possibility of new tariffs coupled with a fall in the value of sterling“.

Contract which may seem reasonable today could quickly spiral out of control in such a scenario. Post Carillion collapse this has further led companies becoming increasingly selective in what they bid for.

Law firm Clyde & Co partner David Hansom says Clients have begun protecting themselves against increases in labour and material costs with Brexit clauses. However in response Contractors are countering those with clauses of their own,

Unfortunately all this planning will have some inevitable cost. For example Department for Transport estimates they will spend £180 million on EU Exit by March 2022.