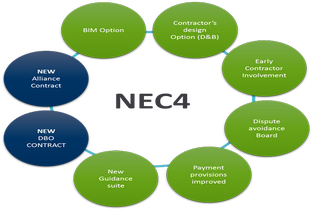 Via our chat function we received an interesting question…

Unfortunately Mr J (real name anonymised) was in a rush and did not provide their e-mail address for us to post an answer, but we still thought it was a cracking question…

So we thought we would do it here!

It is important to first explain the key differences in Programme Acceptance between NEC3 and NEC4 Contract Types.

As covered in our past article, within NEC3 in the absence of a Project Manager’s response, the contract provided that the programme was simply ‘not accepted’, putting all the risk onto the Contractor in allowing the Project Manager to to withhold 25% of the price of work done to date if the Contractor does not provide a programme in accordance with Cl.31.

Within NEC4 the position is improved and the contract includes a provision whereby in the absence of a Project Manager’s response to the submitted programme within two weeks, the Contractor can serve notice of a further week. After this, if there is still no response then the contractor’s programme is ‘deemed accepted’ under the contract.

Another key difference between NEC3 and NEC4, is that the newer version allows recovery of costs even where the Project Manager proposes an instruction which is not accepted. The past exclusion for the cost of preparing compensation events has been deleted and is now recoverable under all Options. There is now the introduction of new CE clause 60(1)(20) (“where the PM notifies the Contractor that a quotation for a proposed instruction is not accepted”).

To answer Mr J’s question the two key concept to understand is that there is a “Planned Completion Date” and the ‘Completion Date’.

Under Clause 31.2 the programme issued for acceptance will show the “Planned Completion Date”, which will be driven by the any event that affects the critical path.

The other is the “Completion Date“, which can only be changed ‘in accordance with the Contract. This reflecting that the contractor is contractually obliged to achieve ‘Completion’ on or before the ‘Completion Date’, under clause 30.1.

As covered under clause 31.3 the Project Manager has to accept or not accept a programme within two weeks of submission. Any non-acceptance having to be communicated back to the Contractor in sufficient detail to Contactor to correct the submission (via a separate response under Clause 13.7). The four reasons reasons for non-acceptance are:

However it should be borne in mind that Clause (14.1) states that acceptance of any communication does not transfer liability away from the Contractor to comply with their obligations under the contract. And so, the “Completion Date” as defined by 11.2 remains. That said, acceptance of the programme is still significant as it recognises that the Client has given affirmation that from their perspective that the programme is realistic, practicable and shows the information that the contract requires.

The workflow below can be used to explain a scenario how the under 32.1 the Contractor is responsible for correcting all Work which the Client has found to be defective or which fails to conform to the Contract Documents whether observed before or after Substantial Completion.

Interactive demo to deep-dive and solve your PPM challenges
Use our interactive dashboard to deep-dive the key Project Controls, Planning and Risk challenges that you are facing. Select the key solution required, to see a worked example demo on the problem you are facing.
Join us at EVA 26: Performance that works
Use our 26% Corporate Discount code to get access to thought leaders across a 2-day physical conference in London with a high-level networking dinner.
What’s new in Primavera 21.12?
Download our ‘Cumulative Features‘ overview comparison tool to compare and review changes from your Current release and then compare it against a potential Target release (up to v21.12).
Recent Posts
Recent Comments
Categories
Copyright © 2016 DADA Enterprises Ltd. All Rights Reserved. Website by Become™
Back To Top